Rock trio Dea Matrona’s latest release ‘Make You My Star’ is an attitude filled track with ferocious hooks and pulsing with youthful energy.

Siblings Mollie and Mamie McGinn, – alongside their lifelong friend Orlaith Forsythe – formed Dea Matrona in their hometown of Belfast in 2018, armed with their formidable talent, a dream, and an ear for a great hook.

‘Make You My Star’ sees the group continue to develop their song writing prowess with this infectious track. Featuring catchy guitar riffs, solid drums, and fuzzing bass each sound melts together to ensure that ‘Make You My Star’ shocks like a bona fide classic rock song.

However, it’s the trio’s gorgeously impeccable harmonies that really help elevate the song. Wearing their influences on their sleeve Dea Matrona certainly don’t try to hide who they are with their vintage 70’s inspired aesthetic that is also prevalent through each of their releases.

Our Krypton Son’s latest album Modern Ruins is the third full-length release from the Derry based singer-songwriter. The moniker of Chris McConaghy, Modern Ruins follows on from his NI Music Prize nominated album ‘Flea’s and Diamonds’ released in 2017. Produced, recorded, and mixed by Ryan Vail, throughout the nine tracks we are taken on a journey of sprawling soundscapes and alluring verse.

Opening with the pensive echoes of ‘Arbor Bird’, the stirring beauty and sweeping strings of the track help to set the tone for the rest album. Inspired by a line in John Berger’s ‘Confabulations’ the song deals with the effects of a stroke on a close family member. Released earlier this summer, ‘White Sun’, the album’s lead single is a compelling mix of folk ramblings and modern electro. A hypnotically engaging song, the addition of synth sounds from Vail help to enhance the ambient mood of this track.

Moving effortlessly from one song to the next, ‘Death Keeps Me Awake at Night’ is a gorgeously mournful and meditative track. There is an astounding depth of honesty at the core of McConaghy’s words no matter the subject. With an evocative track title ‘The Boy with the Cauliflower Ear’ shifts and changes in feeling as a more expansive sound and instrumentation is introduced.

Creating a collection of moments that are both transient and enduring there is a refreshing consistency with each Our Krypton Son’s songs that come from his strikingly personal lyrics.  The pulsing beat through ‘Bloodletting’ helps to keep McConaghy’s vocals smooth and steady. Closing the album with the beautifully intricate ‘I’m a Field in Winter’ the track builds intensely towards the end before fading out with a delicately sombre piano and sits perfectly at the end of this record.

Along with Ryan Vail the pair have worked seamlessly together to create a remarkable album of exceptional arrangements. Through the duration of the album we hear how both artists have come together to create a body of work that sees them move into fresh realms of their own individual sounds. McConaghy’s ability to weave intricate pieces of music with imaginative and thoughtful lyrics helps to confirm his status as one of Ireland’s best kept songwriting secrets. 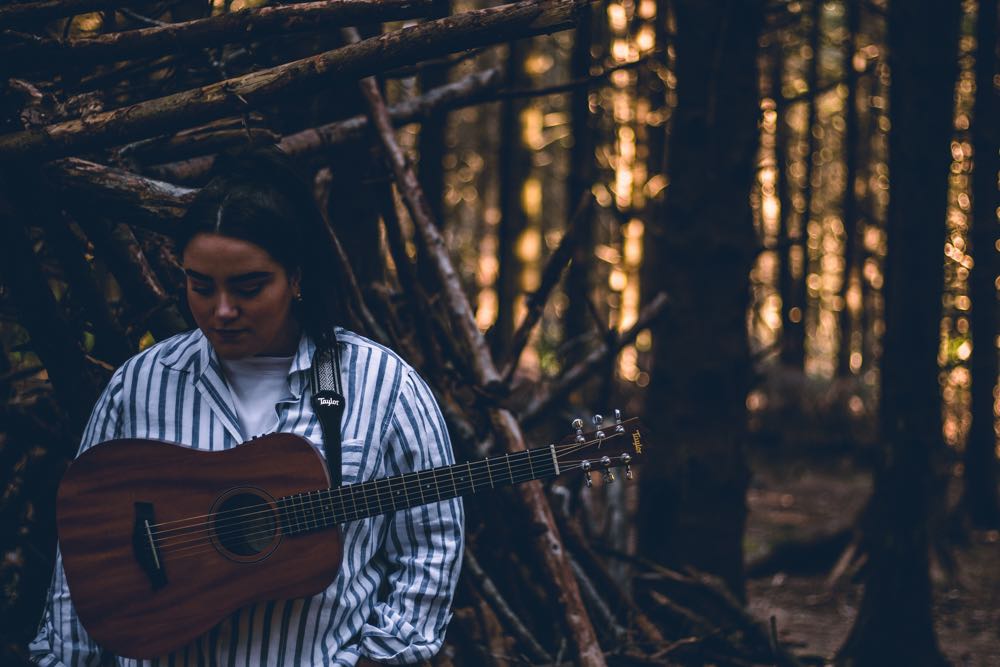 Co. Down based singer CeeV’s latest release is an emotive attempt at expressing all those familiar feelings of missing home through modern pop sensibilities.

Currently based in Newry, CeeV first started to cut her teeth in music while studying at BIMM in Manchester. Although initially lacking the confidence to perform in front of others CeeV finally plucked up the courage and starting releasing music on SoundCloud. After amassing over 30,000 plays, CeeV began performing her own songs and slowly started building a loyal following.

After finishing her studies, CeeV travelled to Ottawa, Canada and determined to improve her craft performed in every venue possible. Now back at home CeeV has been finally releasing her songs to the world with her first release in over a year. The straightforward pop tune accompanied with soulful vocals proves to be a successful combination on ‘Lonely Night’. Along with the new track, CeeV has also provided followers with a striking lyric video.

Speaking about the song CeeV explains “The song’s about sleeplessness, overthinking, nights out, basically tired eyes but a racing mind.”

NI artist Emma Horan has revealed her effortless new track ‘Feeling’ which shows a more pop inspired side to the emerging star.

Recently graduating with an MA in Commercial Songwriting the Lurgan native’s latest single has seen the singer continue to adopt a mainstream pop aesthetic. Following on from ‘Find You’ released earlier this year, Horan has continued to work with Belfast producer Jonny Fitch to create this intimately chill track.

A fresh out of the oven summer banger with silky smooth vocals ‘Feeling’ is an ambitious attempt to achieve pop perfection. Along with a seductively slick chorus wrapped in twinkling vocals, Horan manages to elevate the song while still remaining elusive. Released just over a week ago ‘Feeling’ has already gained recognition from a number of key influencers and achieved strong support from Irish radio. Horan is continuing to work on new music with Jonny Fitch due for release later this year.

By Aine Cronin-McCartney
Listen to ‘Feeling’ below.

Fast rising star Conor Marcus excels on new track ‘No More Broken Hearts’, as he takes us through a journey of loss and acceptance. The young performer who is regarded as one of Northern Ireland’s most promising young singer/songwriters follows his previous release ‘Hold Me Close Again’ with another emotive pop focused single.

Writing his own material since he was nine years old, it wasn’t until inspiration struck at 12 with ‘The Girl I Met’ that Conor acknowledged his song-writing ability. A year later, he performed the song on ITV’s The Voice Kids UK during the blind auditions, where along with his mentor Danny Jones from McFly he went on to reach the semi-finals.

Having already conquered so many achievements Conor is also currently the youngest participant of the renowned ‘Scratch My Progress’ programme. All of which has helped him build a fervent following as he continues to reach new heights of success.

‘No More Broken Hearts’ signals a more mature approach to song-writing as Conor makes moves into new ambitious themes and music. With each of Conor’s releases comes an indication that this is a newcomer to be taken seriously. A breezy moving melody combined with a charming vocal that is supported by animated pop beats helps give the track a cool and effortless vibe.

Speaking about the track, Conor said; “This song is about dealing with the loss of someone close to you. It was inspired by the passing of my granny, many years before I was born, when my mother was just 15. I’ve been working on the song for a long time and I’m really happy with how it’s turned out.”

The presence of exciting and slick production elements has anchored the song as an irresistible holiday nightclub groove. Throughout the track Hammond reflects about falling in love with someone that does not possess the best characteristics, a relatively relatable concept.

Hammond’s sound presents all the makings of a contemporary emerging pop artist with their finger on the pulse. A track to enjoy and dance to through isolation, Hammond’s debut helps to position her as one to watch with ‘Ugly’ sure to appeal to a wide demographic.

Contributor of BBC Across the Line